Heterogeneous photocatalysis – what is it?

It all began in the 1960s with several articles showing oxidation of organic substances in the presence of titanium dioxide irradiated with UV light. However, those works did not focus too much attention and it was not until the seventies when research data on photocatalytic decomposition of water initiated the rapid development of heterogeneous photocatalysis. Unfortunately, to date researchers failed to develop a photocatalyst that could be readily applied in hydrogen production. Nevertheless, the work carried out over the years have resulted in many important discoveries and technologies.

Heterogeneous photocatalysts are usually oxides and sulfides of transition metals. The basic processes resulting in the photocatalytic effect are shown in the figure below. Absorption of light leads to the generation of hole and electron in the valence and conduction bands, respectively (process 1). Those charges may migrate within the semiconductor particle, and can be trapped at surface sites (er–, hr+; process 2). They can also participate in the interfacial electron transfer processes involving the molecules of electron acceptor A and donor D (process 3). Subsequent reactions of primary reduction/oxidation products, A•–and D•+, lead to stable end products Ared and Dox. The unwanted side processes include: charge recombination (processes 4 and 5) and redox reaction between A•– and D•+ resulting in reproduction of the acceptor and the donor (process 6). 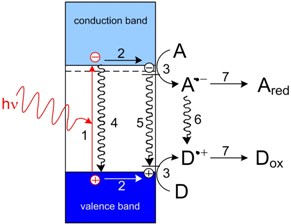 Primary physical and chemical processes occurring in the presence of an irradiated photocatalyst.

So much for basic theory. How can it be used in practice? If the processes 3 would stand for the reactions of water reduction and oxidation, then they could be used for hydrogen production. This is a difficult task and so far cannot be realized with satisfactory efficiencies in purely photocatalytic systems. If the reactants A and D in the process 3 are organic substances, the reaction generates free radicals, which can combine to form new C-C or C-N bonds. Such “photosynthesis” can be performed with fairly good efficiency and selectivity in the presence of cadmium or zinc sulfides as photocatalysts. But most frequently oxygen and water play the role of A and D, respectively. In this case usually titanium dioxide or zinc oxide are used as photocatalysts, while superoxide anion (O2•–) and hydroxyl radical (OH•) are the primary redox products. Those reactive radicals are responsible for most of the oxidation of organic substances. Importantly, oxidation under these conditions is usually complete, giving H2O and CO2 as the final products. The reactions can therefore be used in the processes of water, air or surface purification. Since microorganisms also find the reactive radicals difficult to bear, ZnO and TiO2 can be useful in photodisinfection.

In our team we develop new photocatalysts offering new intriguing properties. Our materials operate both upon visible and ultraviolet light illumination. They can be used for water and air purification and disinfection. We work on applications of these systems also in medicine and optoelectronics.