Photocatalytic reactions are processes that change the chemical reaction rates or their initiation occurs due to an interaction of photocatalyst with ultraviolet, visible or infrared light. Photocatalytic reactions can occur at the surface of the irradiated semiconductor, which serves as a photocatalyst. Photocatalysts after absorbing light are able to cause reaction of compounds in its proximity. It is often that the used photocatalyst is in different state of matter than the substances that it can react with. This situation is called heterogeneous photocatalysis. Currently, the processes that use photocatalysts are attracting much attention, owed to their application in solar to chemical energy conversion, in water splitting processes, CO2 reduction to form liquid or gas fuels, or even photosynthesis of complex organic compounds. Their course is heavily dependent on the redox properties of the photocatalyst, influenced by the electronic structure of the semiconductor. Energy of the excited charges, and hence the feasibility of the redox processes depends on the electronic structure of the photocatalyst and, in particular, the distribution of the density of electronic states (DOS) close to the edge of the valence and conduction bands. The DOS distribution heavily determines activity, we postulate the ability to correlate it with photocatalytic activity of photocatalyst; to determine role of individual electronic states (reactive sites, recombination sites, etc.) and to control the DOS distribution by means of chemical and structural modifications of photocatalyst. The goal of this project is to synthesize photocatalysts with controlled distribution of electronic states within the band gap, controlled potentials of band gap edges, and to determine the dependence of photocatalytic activity on the achieved density of states (DOS).

Synthesis of the base materials that are p- and n-type semiconductors such as TiO2, ZnS, MTiO3, CuI, NiO, etc., according to well-known and described techniques (sol-gel, hydrothermal, thermal, solvatothermal, etc.). Most of the materials were investigated as photocatalysts, but conscious electronic states engineering, and DOS correlation with their activity is novel. Special effort will be put to shape-controlled (euhedric) materials synthesis, that will be conducted mainly in hydrothermal conditions in the presence of capping agents. The materials will be modified (doping, surface modification) with methods such as SILAR (successive ionic layer adsorption and reaction), ALD (atomic layer deposition) or by plasma usage. Materials modification will also be achieved by reduction of labile electron traps. Aside of physicochemical characterization including spectroscopy (IR, absorption and emission UV-Vis), structural (XRD, SEM, TEM, BET) and electrochemical methods, determination of DOS distribution by means of developed by us method that combines electrochemistry and reflectance spectroscopy (DRS-SEC) will be especially relevant. Simultaneously within the project the technique will be continuously developed – to achieve the characteristics of states near the valence band we are planning to combine the emission spectroscopy and electrochemistry. The results obtained by this method will be compared with the methods developed in other laboratories, mainly with DB-PAS (double-beam photoacoustic spectroscopy), and the results obtained by quantum calculations and computer simulations. The final stage of the project will encompass correlation of the determined electronic structure of photomaterials with their activity in the photocatalytic processes.

Experiments carried out during the project will allow to extend the existing state of knowledge about the actual electronic structure of semiconductor photocatalysts, the development of techniques for determining these parameters and the creation of new tools for the experimental determination of DOS. We must understand how to control the density of electronic states in semiconductors (title “engineering of electronic states”) and by this in a conscious way synthesize more efficient photocatalysts that provide adequate redox properties, which could be used in solar to chemical energy conversion processes. 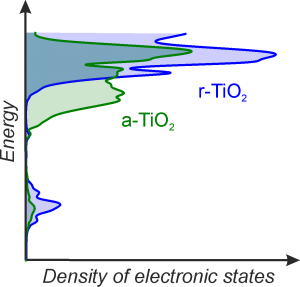