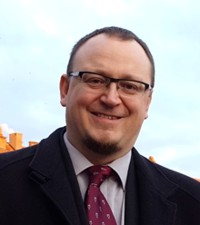 Graduated from the Jagiellonian University in Kraków in 1997, he completed his Ph.D. degree in 2000 at the University of Erlangen-Nürnberg, Germany. In 2002 appointed as an assistant professor at the Faculty of Chemistry, Jagiellonian University, where he completed his habilitation in 2009 and became an associate professor. Since 2011 he has a position of professor since 2016 he is a full professor. In 2013 he was appointed as the head of the Department of Inorganic Chemistry at Jagiellonian University since 2016 he is a deputy dean for research and cooperation at the Faculty of Chemistry, Jagiellonian University. His research interests include mechanisms of photocatalytic processes (especially those involving TiO2 photosensitization and activation of small molecules), redox properties of photocatalysts, photocatalytic detoxification and disinfection, photocatalytic carbon dioxide fixation, as well as photoelectrochemistry and spectroelectrochemistry of semiconductors. He is the author of 95 papers and book chapters (cited ca. 4000 times, h = 32), several patents and patent applications. In 2014 and 2015 he was a visiting professor at the Catalysis Research Center, Hokkaido University, Sapporo, and at School of Computing, Engineering and Mathematics, Western Sydney University.