Offers and application form can be downloaded from here.

Dr. Przemysław Łabuz obtained a grant from National Science Centre within SONATA 11 programme. The project goal and title are “Mechanisms of toxicity and phototoxicity of photoactive oxide nanomaterials”.

Four members of our group have attended the 16th Czech – Polish Catalytic Symposium (CzePoCat), held in Ostrava, Czech Republic, on 2nd to 4th February 2017. We have presented 4 lectures. 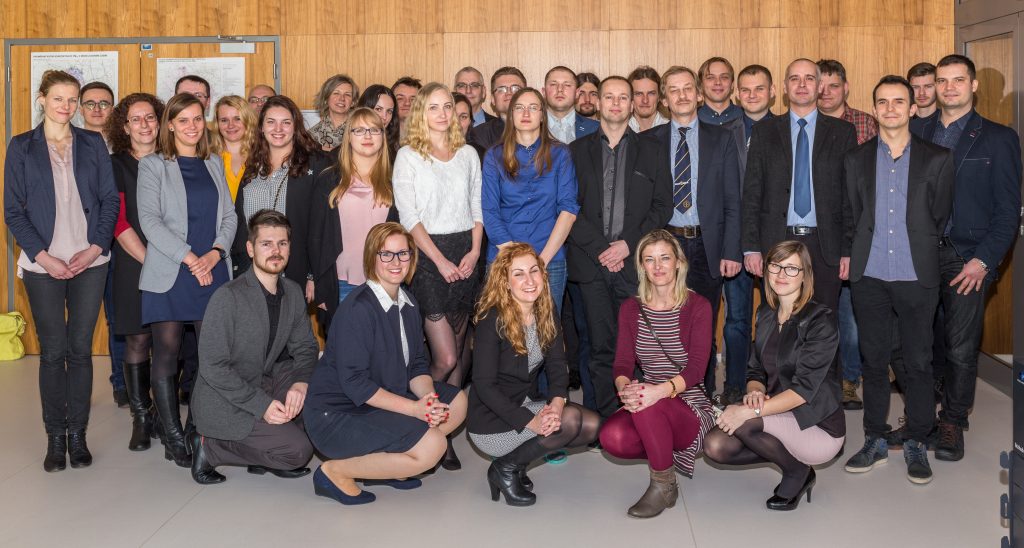 On October 26, 2016, the President of the Republic of Poland, Andrzej Duda, nominated 99 academic teachers and employees of science and art at the Presidential Palace in Warsaw. Among the nominees there was Wojciech Macyk. 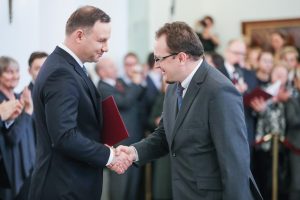 Marcin Kobielusz has got his PhD degree. Congratulation!

Activation of C1 molecules in photocatalytic systems. The influence of electronic structure on the processes

The aim of the work was to determine the influence of the electronic structure of a semiconductor on its photocatalytic activity. In this doctoral thesis a modified spectroelectrochemical method is proposed, as a new technique to characterize the electronic states localized close to the edge of the conduction band. Distribution of additional electronic states localized within the bandgap can be qualitatively and quantitatively characterized using this approach. The applicability of the method in determination of deep and shallow electron traps was confirmed for selected semiconductors, such as TiO2, ZnO and ZnS.The proposed method has been applied to determine the influence of the energy states localized within the bandgap on processes of carbon dioxide reduction and methane oxidation. The work was focused on the study of multi- and one-electron reduction of carbon dioxide, and on photocatalytic steam reforming of methane. The studied materials involved bare and modified semiconductors. The influence of applied modifications including metal deposition, thermal treatment, atomic layer deposition, etc. on the photoactivity in the processes of photocatalytic oxidation and reduction reactions, as well as on the electronic structures of materials, has been analysed and discussed. Results and conclusions described in the thesis extend knowledge not only on mechanism of C1 activation, but also can be very useful in elucidating other photocatalytic processes, such as water splitting, hydroxyl radicals photogeneration, organic synthesis and many others.

Szymon Wojtyła has got his PhD degree. Congratulation!

Numerous photocatalytic processes such as degradation of pollutants or organic synthesis occurs with reactive oxygen species, that are formed mainly as an effect of photoinduced charge transfer from excited semiconductor to O2 and H2O molecules. Photocatalytic activation of oxygen may lead to formation of two reactive oxygen species: superoxide radical anion and singlet oxygen. The former one is formed by one-electron reduction of oxygen while singlet oxygen can be generated on two pathways, involving either the electron transfer, generation of O2•- and its oxidation with a hole, or by a direct energy transfer to 3O2 molecule. The goal of this thesis was to study the mechanism and efficiency of singlet oxygen formation from molecular oxygen O2 and ozone O3 in photocatalytic heterogeneous systems. It is more and more discerned that alongside novel photocatalysts developments, understanding of the mechanism of primary photocatalytic processes is crucial for the technological development of photocatalysis. In this context, this thesis focuses on understanding of the mechanisms governing oxygen activation based on photoinduced charge or energy transfer, resulting in singlet oxygen formation. Moreover, a new method of singlet oxygen detection was developed with this work. A series of heterogeneous semiconducting materials has been prepared: neat and silylated or doped TiO2, silicon-based materials, wide band gap semiconductors, such as ZnS, ZnO, NiO, and semiconductors with a narrower band gap, e.g. CdS, Cu2O, Fe2O3. All materials have been characterized using spectroscopic and crystallographic methods. They were tested as photocatalysts of singlet oxygen formation from O2. Moreover, ozone was considered as an alternative substrate for singlet oxygen formation on a photocatalytic way. Obtained results prove that the prepared nanocrystalline materials are active photocatalysts and upon irradiation they are able to generate singlet oxygen based on one or both discussed mechanisms. Si, silylated TiO2, Fe2O3, Cu2O appeard particulary active oxygen photosensitizers. Formation of other reactive oxygen species, such as superoxide anion radical and hydroxyl radical from O2 and O3, has also been studied and discussed. Results and conclusions shine some new light on photocatalytic transformations involving 1O2 and O3.

Prof. Wojciech Macyk obtained a grant from National Science Centre within OPUS 10 programme. The project “Engineering of electronic states in semiconductor photocatalysts” is focused on design and characterization of electronic properties of semiconducting materials.

Rafał Sadowski has got his PhD degree. Congratulation!

The main goal of the doctoral thesis was to obtain stable and photoactive upon visible light irradiation semiconductor coatings on various polymers. A further purpose of this study was to understand the nature of semiconductor particles binding to polymer surface and determination of physical and chemical properties of the photocatalytic coatings. Additionally, the most active coatings were subjected to microbiological tests based on a modified ISO standard. The goal has been achieved by three steps procedure: activation, immobilization and sensitization. The crucial step was activation of the polymer surface by a low temperature oxygen plasma. It was shown that plasma pre-treatment is essential for oxygen groups formation which contribute to titanium dioxide binding to the polymer surface. Unmodified TiO2 can only be used as a photocatalyst active under ultraviolet (UV) light, which limits future applications. For this reason coatings were photosensitized by titanium(IV) surface charge transfer complexes formed by impregnation with organic ligands (catechol, 2,3-napthalenediol, pyrogallol, salicylic acid, ascorbic acid and rutin). Moreover, the efficacy of such coatings against Escherichia coli and Staphylococcus aureus was demonstrated.