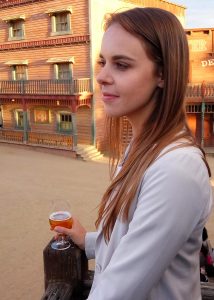 Magdalena Mikrut obtained her bachelor degree in chemistry in 2013 at the Jagiellonian University. During master studies she was a student in FNP TEAM grant “Model dyes and photosynthetic complexes in photodynamic therapy and solar energy conversion”. In 2015 she defended her master’s thesis under supervision of prof. Leszek Fiedor entitled “Characteristic of xenobiotic transporter BCRP in vitro and in vivo”. Magdalena joined Photocatalysis Team in 2015 and she is doing doctoral studies under supervision of prof. Wojciech Macyk. She is also a PhD student in NCN Symfonia grant “Air Pollution versus Autoimmunity: The Role of Multiphase Aqueous Inorganic Chemistry (APARIC)”, which is led by professor Rudi van Eldik. Her work is focused on air pollution analysis: from physicochemical to determining the photoactivity of particulate matter.